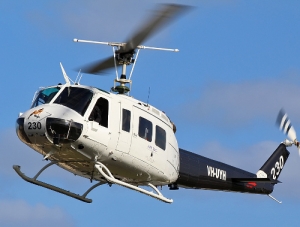 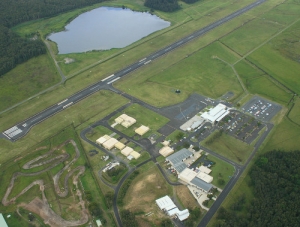 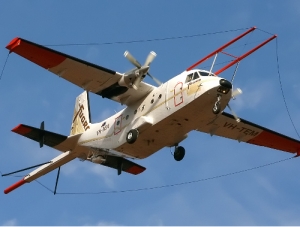 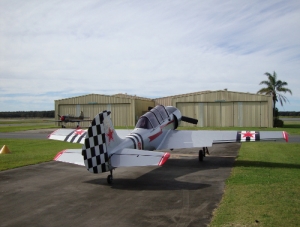 The Ballina Aero Club was formed in 1928 and had a role in the impressive 1928 centenary celebrations for Ballina. (Centenary of the discovery of the Richmond River in 1828.) The airfield was parallel to Owen Street (in the area now used as playing fields) and remained in limited use until the early 1970’s, although the Licence had lapsed in 1940’s.

The Council granted the Aero Club a parcel of land to erect a Clubhouse in response to the work carried out by members in the establishment of the aerodrome.

The aerodrome was given a B Class grading in 1931 which entitled the Council to charge for its use and the charges were set at 2/6 (25 cents) for a single landing or 10/- ($1) for a series of landings. Notices warning land owners about allowing cattle to stray onto the area were erected.

Little is known of the Ballina Aero Club during those years from 1928 to the 1950’s and it is believed that the Club did not actively operate until reactivated on 28th August, 1976. There is information to suggest that Ballina Flying School was formed on 14 August, 1929 but ceased operation prior to December 1930.

In 1976, Ballina Airpark private airfield was opened at West Ballina and Richmond Aviation (Ballina) Pty Ltd was commenced as a charter service operated by Gary Faulks and John Wall (former TAA pilot) and was the first air charter licence based in Ballina.

In 1979 Council Shire Council granted Ballina Pilots Association a block of land adjoining Ballina Airpark (now occupied by Five Star Car Sales) for the housing of a retired RAAF aircraft (which had been granted to the Pilots Association by the RAAF) The concept was to start an aviation museum. Due to the high cost of transporting the large aircraft by road from Townville the project faltered.

With the opening of Ballina Airport in 1986, Ballina Airpark closed in early 1987 and the clubhouse was officially opened at Ballina Airport by Councillor Keith Johnson Shire President on 10th November, 1990 and operated there until removed in 2009. A new Clubhouse was completed in 2014. on land leased from Council.

The reference to the 1928 Ballina Aero Club is contained in the book Across Three Bridges 1983 by Cliff Murray and no further detailed information is available. Any information from other sources would be welcomed.